This was the last Bowie album of the 1990’s and continued his trend of releasing throughout the decade a number of truly excellent, generally under-rated works. “Hours” is another hidden gem in the Bowie cannon which is full of wonderful, thought-provoking material, well worth a visit if you haven’t had the pleasure yet of listening to it.

Co-written with Reeves Gabrels, his ex-Tin Machine comrade and collaborator throughout much of the 1990’s, the album started life as the soundtrack to the computer game “Omikron: The Nomad Soul“. For a computing geek, I never really got much into computer games but I remember at the time getting a copy of Omikron and trying to get it to run on my then Windows NT laptop. It was a really fun game where you interact in a complex world while taking over various characters, fun that is until I got stuck trying to get past a heap of guards near the end before finally giving up. The game featured much of the music from what would eventually be the “Hours” album, including a few “live” performances by “The Dreamers” (a band based on Bowie, Gabrels and his then live bass player, Gail Ann Dorsey), playing in various dodgy bars throughout Omikron. 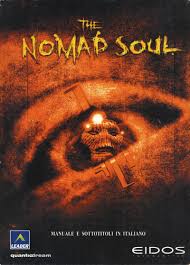 With the end of yet another decade fast approaching and with Bowie now in his 50’s, “Hours” is one of the most nostalgic, backwards yearning albums of his career. I distinctly remember at the time thinking that Bowie was actually getting “older”, really for the first time. He looked a little older, especially in this videos from the album, sounded a little older and indeed touched on his past in a way that an older person would reminisce of days gone by. This is all the more enhanced by the album cover, that has a (possibly dying) Bowie being comforted by a younger looking “angelic” Bowie.

The music touches on various previous parts of Bowie’s career, although in typical Bowie style it still sounded fresh and new. At the time, some critics mentioned it being a relative to the “Hunky Dory” album, but it’s not really a view I share. I’ve always thought there are references here to his glam period, his Berlin trilogy and indeed to his more recent material. But it most certainly didn’t sound too much like his previous drum ‘n’ bass frantic “Earthling” album, this generally being much mellower and quieter in scope.

The album kicks off with “Thursday’s Child” which was also the lead off single from the album (in most territories). It’s one of those quieter, dreamy songs so typical of the album, which has a rather lovely melodic feel. Bowie sings in his best “fragile” voice with a gorgeous chorus that just takes you away. A truly beautiful song. The video features Bowie staring at himself in the mirror and thinking when he was with a younger version of his partner. Music Video.  As with many releases at the time, there were a number of different versions of the CD single, which in turn featured different B-Sides to collect. It’s an expensive business being a Bowie fan, I’ll cover the B-Sides later on.

“Something In The Air” is another cracking song, this time featuring a much more “electronic” sound, full of weird little noises and with a somewhat distorted Bowie lead vocal. As with much of the album, Bowie seems to feel that things are no longer what they once were and there’s a certain unease with what’s going on here. This song is probably the closest on this album to what he had previously recorded on the “1. Outside” and “Earthing” albums. Gabrel’s lead guitar and the strange sounds he can get out of it is on display the most here.

“Survive” is another lovely song, with another sad, vulnerable vocal on which Bowie says he’ll survive but sounding as if he’ll do anything but now that a love is lost. Gabrel’s guitar line here really is excellent and the overall track is just sublime. For me, it makes me think just a little of the “Station To Station” album. This was the seond single off the album and featured a clever video of Bowie floating around the kitchen table. Music Video.

“If I’m dreaming My Life” is perhaps my favourite track on the album, although there are several possible candidates. A long brooding piece, it starts typically slow before spending up before each catchy, rhythmic alternate verse, with Bowie wondering if his life and that girl of his was all just one long dream. Gabrels features predominantly throughout with various guitar flourishes, including during the long coda section at the end. At 7 plus minutes, it’s one of the longer pieces Bowie has recorded and although no “Station To Station”, it’s still an excellent track. Bowie performed a nice version of this on his appearance on “VH1 Storytellers” (more on this later).

“Seven” on the other hand is one of the weaker moments on the album. Released as the third and last single off the album (with again with so many different versions I almost lost count), it’s a rather basic acoustic track with a slide guitar line that’s all very nice but just doesn’t do it for me. “Seven” was also performed as part of Bowie’s “VH1 Storytellers” appearance. Video link to Seven on Storytellers.

“What’s Really Happening?” has an interesting story. As a promotion on “BowieNet”, Bowie’s internet fan club,  a competition was run for some lucky bugger to write lyrics for a new song that would appear on this album. Out of 20,000+ entrants, the winner was Alex Grant and the result was this track. As some consolation for all those who missed out, the recording of the track was webcast “live” on the internet for BowieNet members. The lyrics although not “Lennon-esque” (or Bowie level quality for that matter) do suit the tone of the album and I’ve always enjoyed the track with its fuzzy guitars and electronic rumblings.

The rocker of the album is definitely “The Pretty Things Are Going To Hell” and is a definite highlight. With little glimpses back to his Glam-Rock era and with Gabrels sounding not unlike Mick Ronson, Bowie is in vintage form here and the track has a rare swagger not found elsewhere on the album. Although Grabels guitar is most predominant, the excellent bass- line by Mark Plati deserves credit and helps to drive the track along. The lead-off single here in Australia, a remixed version of the song featured on the “Stigmata” film soundtrack. Video Performance. 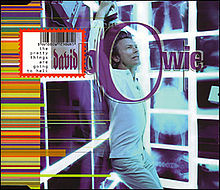 “New Angels Of Promise” is the song I most associate with the Omikron computer game and it’s the song featured at the very start. I’ve always loved this song as it has much of the ingredients of a classic Bowie track, with a wonderful mix of weird electronic instrumentation, a thumping rhythm and that somewhat distorted Bowie vocal delivery. With a hint towards the first side of the “Heroes” album, if you enjoy 70’s Bowie you’ll very likely enjoy this.

“Brilliant Adventure” is even more of a hint towards the “Heroes” album, this time the B-side with this being the only instrumental on the album. With a strong Japanese vibe thanks to the featured koto, it echoes back to both “Moss Garden” and “Crystal Japan” from his past. Considering the strong influence and background of the “Omikron” soundtrack, it’s perhaps a little surprising that there weren’t more instrumentals featured on the album. Personally I find this track a little ho-hum and not as interesting as the aforementioned influences.

The album proper closes with the excellent “The Dreamers“, an atmospheric piece and one of my favourite Bowie vocals on the album. “The Dreamers” is the name of the fantasy Bowie band in the Omikron computer game, although the song itself is a somewhat obscure piece detailing dark dreams and shadows. Bowie’s vocals are again slightly distorted but he still hits the big notes impressively. A very satisfactory end to an overall highly satisfactory album.

Although the album was a typical hit in the UK, reaching No. 5 in the charts, it was however the first non-Tin Machine (or “Buddha of Suburbia” soundtrack album) not to make the Top 40 in the US since way back to the Ziggy album, only reaching a disappointing 47. Which is a pity, because this really is a wonderful album, that had a very modern feel for 1999 and I think would actually appeal to many in the US market.

At the time of release, as well as the standard packaging, a limited edition version featuring a lenticular cover kept us Bowie collectors happy. I would though recommend trying to get hold of the “David Bowie” box set which featured all the albums released between “1. Outside” and “Heathen”, each with a 2 CD package featuring various re-mixes, B-Sides and bonus tracks from each album. With regard “Hours”, this included the other four original tracks that were released as B-sides on various versions of the “Thursday’s Child” singles:

“We All Go Through” has a Tin Machine feel during one of their quieter moments, but overall the track is kinda bland and forgettable. In other words, a perfect B-Side track.

“1917” on the other hand is brilliant, one of those hidden Bowie gems and my favourite piece from the whole “Hours” sessions. A thoroughly weird little electronic-based instrumental, it reminds me just a little of the A-Side of the “Low” album, especially with that half finished feeling in how the track comes and then quickly disappears again.

“We Shall Go To Town” is a somewhat sombre piece, with an almost tortured vocal by Bowie who sounds positively in pain throughout. Gabrel’s guitar solo sounds akin to him trying to throttle the thing, not unlike Bowie and his saxophone throttling Neukoln piece from “Heroes”. Although I might not have sold this too well, it’s actually a great track and a million miles from his 80’s stuff.

“No-One Calls” is another down beat track with a somewhat hypnotic, repetitive, electronic/keyboard based arrangement, with Bowie singing in his best dour voice. Not a classic perhaps, but again perfect B-side fodder.

Soon after the release of “Hours”, Bowie and Gabrels went their separate ways, ending a 10 years working relationship and the end of a productive, generally underrated period of Bowie’s career. Their last performance together was on 23 August 1999 when Bowie performed live on VH1 Storytellers which featured “Thursday’s Child”, “Seven”, Survive” and “If I’m Dreaming My Life” from “Hours” among other classics from Bowie’s career. An album/DVD of the show was released some 10 years later on 6 July 2009.

Bowie performed a very small low-key tour of just 8 live shows to promote the album. Gabrels was replaced on guitar by Page Hamilton with the tour setlist usually including “Thursday’s Child”, “Survive”, “Something In The Air”, “Seven” and “The Pretty Things Are Going To Hell” from the album.

With “Hours” we close off the 90’s and arguably Bowie’s most underrated period of his career. Bowie would move on into the new millennium and create two more high quality albums before his long 10 year break following his heart attack. But that’s a story for another day.