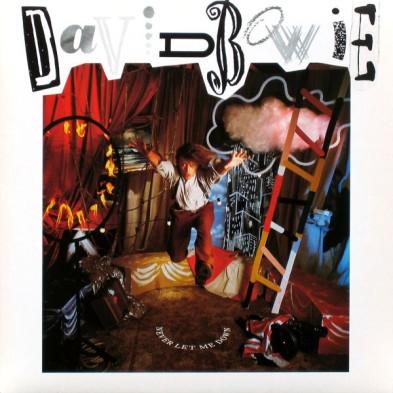 “Never Let Me Down“ is David Bowie’s 17th studio album and was originally released on 20 April 1987.

It had been three relatively long years since his last album, “Tonight“, which while commercially successful and a No 1, left the critics generally unimpressed. In between, he had released a number of singles and contributed on a number of soundtracks, most notably “Absolute Beginners” (with the title song arguably his best work throughout the entire 1983-1987 period) and “Labyrinth“.

However by 1987, David Bowie was in a difficult place artistically. He’s last two albums “Let’s Dance” and “Tonight” were both commercially very successful and all the middle-aged Phil Collins fans with their bulging wallets were really getting into this version of David Bowie. EMI, his record label, were also loving the revenues coming from albums that were enjoying high chart positions on both sides of the Atlantic and elsewhere.

Unfortunately, enjoying commercial success in almost (but not quite) equal measure to Michael Jackson was just not a position that David Bowie was used to or had really coveted previously. But in this post Tony Defries era where the majority of the money he earned actually went into his bank account, meant Bowie for the first time was torn between creating music he enjoyed and excited him creatively, versus writing music he felt his growing fan base would enjoy, would buy in huge quantities and would help to increase his ever impressive fortune.

This conflict resulted in an artistic “writers block” where Bowie struggled in self-doubt and concerns he would potentially fail both commercially and artistically. And in the end, his fears were kinda realised when the resultant album “Never Let Me Down” only reaching No. 6 in the UK charts, 34 on the US Billboard and enjoyed only mixed, generally lukewarm reviews by music critics.

Things had seemed so optimistic beforehand.  He had just produced and co-wrote the criminally underrated “Blah Blah Blah” album for Iggy Pop, his mate who had featured so predominately in his previous EMI albums.  An album if true be told, was superior to everything he had recorded since the Scary Monsters album.

His also featured heavily on the credits of “Never Let Me Down”, writing or co-writing all the material bar the obligatory Iggy Pop cover “Bang Bang“, a level of output he hadn’t managed in his previous two albums. He also played instruments on the new album in the form of “guitar, keyboards, Mellotron, Moog synthesizer, harmonica and tambourine”, something he had left to his impressive array of session musicians on the previous two albums. The collection of session musicians on this album is impressive, based mainly of those who worked on his previous EMI albums, with the notable inclusion of multi-instrumentalist Erdal Kizilcay and the famed Peter Frampton on guitar.

So it looked initially liked he really cared about this album and perhaps a new masterpiece was on its way.

But the end result was entirely mediocre with a collection of songs that were simply substandard to the Bowie we had come to expect and with an 80’s era production that has not aged particularly well. The music can be labelled “Soft Rock” or “Pop”, so if you like Phil Collins, Hall & Oakes, Huey Lewis and the News, etc. you might think this album positively rocks. But those with fond memories of Scary Monsters being recorded in the same decade, the comparison couldn’t be more stark or disappointing.

The opening track and lead-off single from the album “Day In Day Out” forebodes what’s to come. A plodding, drum overdose song that lacks any of the hooks associated with classic Bowie. Even Molly Meldrum gave the song and associated video (which featured the plight of homelessness in the US with some controversial “R” rated scenes) a negative review on Countdown, unheard of previously. Molly saying bad things about Bowie, WTF !! Music Video.

The next track “Time Will Crawl” and second single is the clear highlight of the album. With imaginous lyrics around the theme of the recent Chernobyl nuclear disaster, it’s a great song that the heavy production doesn’t quite bury. Bowie also sounds great on this, with an eerie performance that captures the mood of the song perfectly. As a indication of how much this song stands out from the rest of the album, Bowie even selected a version of this track on his “iSelectBowie” compilation album. Music Video. 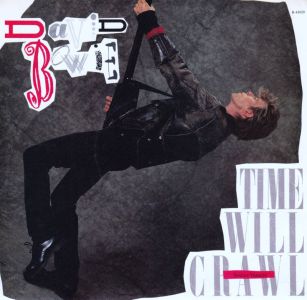 Next comes “Beat Of Your Drum“, a nice little song with catchy verse and chorus, with just a hint of uneasiness, but again spoilt somewhat by the overall ploddy production. The potential of this being a much better album is there, but that magical element so typical of Bowie’s better work is simply missing here.

About his long time personal assistant Coco Schwab, the title track and third single “Never Let Me Down” comes next and is again a rather nice song, with perhaps his best, tinder vocal performance on the album. But it’s not exciting, original, confronting, atmospheric or spine-tingling, which is what we usually expect from Bowie. Bowie doesn’t usually just do nice, you get the point. Music Video.

“Zeroes” continues the trend of having some promise as a song and has that hint of nostalgia that Bowie was after but it just doesn’t get there. The tune has the usual plodding drum back beat, the guitar solo is uninspiring and the vocal mix just doesn’t do Bowie justice.

The last track on side one (yes, I originally got this as a record, my last Bowie record for many a year with CDs being the media of choice from here on in) is “Glass Spider” and is my second favourite track on the album, if only for the opening. The spoken opening sequence reminds me a tad of the start to the “Diamond Dogs” album and manages to take you to that other place. But yet again the final product doesn’t quite deliver and the mythological imaginary of spidery webs is broken by the unadventurous Frampton guitar and that damn thumping 80’s era drum sound.

Although the first side can only be best described as somewhat mediocre by Bowie standards, it’s unfortunately the better of the two sides. Things only go downhill once you flip the album over…

“Shining Star (Makin’ My Love)” can be politely described as not being very good or more accurately, bloody awful. A crunchy, repetitive beat with annoyingly high pitched instrumentation and lame lyrics is broken by a so-called “rap” sequence by Mickey Rouke (yes, that Mickey Rouke). It doesn’t work.

“New York’s In Love” is a forgettable track with a tune I couldn’t hum even if I was offered a large some of money. It’s about…, I have no idea and sadly with this album, I really have not interest in finding out. It’s a nothing song.

“‘87 and Cry” has a heavy drum beat and squealing guitar that makes it sound just like other songs on the album. That’s not a complement by the way. It’s again a nothing sort of song that just doesn’t have much to hold your interest. It’s aged as much as the title of the song would suggest. But we haven’t got to the low point yet…

“Too Dizzy” is so bad that Bowie himself insistent that the song be removed from all subsequent re-issues of the album. In that respect, it’s a bit of a rarity these days but I wouldn’t recommend spending too much time looking for it. It has all the key elements (boring drum beat, messy instrumentation and bland lyrics) that characterises this album. An instantly forgettable song.

“Bang Bang” closes off the album and is the clear best track on this forgettable second side of the album. A cover of the Iggy Pop song from his equally forgettable “Party” album, it at least has a structure and vibe that will have you tapping your feet. But when you compare it to other closing tracks on Bowie albums such as “The Bewlay Brothers”, “Rock ‘n’ Roll Suicide” and “Lady Grinning Soul”, well you get my point. Things just don’t really compare here.

Over the years, I’ve really really tried to “get into” this album as it holds a lot of nostalgia for me. For a start, my parents bought me the limited “blue” coloured vinyl version of the album as a surprise present, which remains unplayed but treasured to this day.

I also enjoyed one of the best weeks of my life when I spent a week commuting from Canberra to Sydney to see all 8 of Bowie’s “Glass Spider” shows at the Sydney Entertainment Centre. I couldn’t get time off work as I didn’t have the leave, so left work at 4pm each day, drove to Sydney, watched the show and then drove back to be in bed by 3am to do it all again the next day. Although the “Glass Spider” tour was critically panned, I loved it. It was David Bowie live for crying out loud and he was amazing !! Best of all, some of the shows were recorded for the video release, so what a perfect souvenir of the time. Video of Sydney Glass Spider shows.

But alas, I have never enjoyed this album anything like most of his others and in my humble opinion, remains the nadir of his creative output. If you were to graph the quality of Bowie’s albums, you would plot “Never Let Me Down” humbly on Planet Earth and many of his masterpieces in the stratosphere or indeed in outer space and beyond.

Bowie himself has been quite disparaging of the album over the years and once stated “Never Let Me Down had good songs that I mistreated. I didn’t really apply myself. I wasn’t quite sure what I was supposed to be doing. I wish there had been someone around who could have told me”.

Interestingly and perhaps most telling of all, I don’t believe Bowie ever performed any of the songs from the album again after the accompanying “Glass Spiders” tour.

After the tour and after spectacularly burning the whole Glass Spider live set following the last show in New Zealand, Bowie recognised the need for a drastic change in direction. If he was to keep his legacy and keep his artistic integrity, he had to say goodbye to his current commercial considerations, say goodbye to his Phil Collins fan base and start creating records that again said up yours to the music establishment.

And boy, did Tin Machine achieve all that and a lot more. But that’s a story for another day.